GotCourts League - The novel championship format for all who enjoy tennis

Zurich, 27 April 2021 – There are around 600,000 active tennis players in Switzerland. Now that competitions in the amateur sector are being allowed again, the booking platform GotCourts is launching Switzerland's first completely open tennis championship format, in which everyone can participate – from beginners to ambitious amateur players. The GotCourts League is digitally organised via the GotCourts App. The games can be played at any time, from now until October 2021 on one of the courts available in the app, against opponents either chosen by the user or suggested by the system. The results are then recorded in the app and included in the GotCourts League Rating. The GotCourts App is available to download for free on iOS and Android app stores. Participation costs 75 Swiss francs for the entire season.

The GotCourts League is not played on weekends like traditional tennis tournaments. In the new league, matches will be decentralised and completely flexible. Participants choose their opponents online and decide for themselves when, where, and how often they want to play their games. The format is entirely open: All ages are welcomed, with or without a license. Men can play against women, and you can join at any time. Tournament experience is not necessary; the various strengths/levels of play are taken into account in the rating system. All results are recorded in the GotCourts App and included in the rating system.

"The GotCourts League is the logical next step of our booking platform, which already covers the most important needs in tennis. With a digitally organised tournament, we aim to bring competitive tennis back to clubs and facilities as quickly as possible - in a manner compliant with coronavirus regulations," says Diego Seitz, CEO of GotCourts, a young Swiss technology company that offers a marketplace on the platform of the same name, bringing racket athletes, clubs, and coaches together onto courts which can be reserved online nationwide.

"The GotCourts League is meant to be fun, first and foremost. That's why we've developed an open game format to keep presenting players with additional content and new challenges," Diego explains. If the corona situation allows it, the GotCourts League offers, additionally, special summer tournaments and the best of the season can take part in a final tournament. Swiss Tennis welcomes the GotCourts initiative, as it is a competitive format for recreational and occasional players who want to measure themselves against others. It complements the range of competitions offered by Swiss Tennis for licensed players at the grassroots level and enables the association to introduce ambitious new players to competitive tennis. Jean-Daniel Laffely, CEO of Vaudoise Insurance confirms the good news. "We’re absolutely delighted to have a hand in this new kind of amateur tennis tournament in Switzerland. We’re passionate about opening up tennis to as many people as possible; Vaudoise is in a perfect position to take up this role and we’re excited to be supporting the GotCourts League as Presenting Partner."

Registration is now open. Interested parties can register for the GotCourts League via the app or on the website gotcourts-league.com. Play will begin immediately, and those who miss the start can still join on a later date and play their matches until the tournament ends in October 2021. Participation costs 75 Swiss francs.

The GotCourts League is presented by Vaudoise. The Official Partners are Norqain, Peugeot, Swica, Tennis Factory and the Blick Group as Media Partner. GotCourts is the Main Partner of Swiss Tennis.

What is the GotCourts League?
The GotCourts League is a new type of tennis format in which participants decide against whom, when, where, and how often they play matches. Anyone can play against any opponent who has registered for the GotCourts League: Friends, club colleagues, or unknown players. The system regularly suggests new opponents of the appropriate strength/level of play. Played in clubs, tennis centres, or on public tennis courts throughout Switzerland. After the first match played, players will receive a projected rating. After five matches played, the projected rating converts to a validated GotCourts Rating. GotCourts League participants compete in a total of 7 leagues, as per their rating, the outcome of which determines their places in the final tournament.

Where can I register?
Participants need an active user account on gotcourts.com. If the participant does not have a user account, one will be created automatically during the registration process via the app or website gotcourts-league.com.

Who can I play against?
In the GotCourts League, everyone can play against everyone and the participants can all challenge each other. With this new format, women can compete against men, too. The various strengths/levels of play are taken into account in the rating system

How does the game format work?
The GotCourts League game mode is designed to have matches completely finished in one court hour. There are three 10-point tie-breaks in each match. Each tie-break ends when the first player reaches 10 points. There is no need for a 2-point tie-break. Even with a 2-0 set lead in the tie-breaks, the third tie-break will be played. Both players can earn valuable rating points by winning the third tie-break. A typical GotCourts League result looks like this: 10:6; 9:10; 10:7. Player 1 wins with 2:1 sets.

How much does it cost to participate in the GotCourts League, and where can I register?
The GotCourts App can be downloaded for free on iOS and Android app stores. Interested parties can register now via the app or on the website gotcourts-league.com. Participation costs a one-time fee of 75 Swiss francs for the entire season. Play will begin immediately, and those who miss the start can still join on a later date and play their matches until the tournament ends in October 2021. 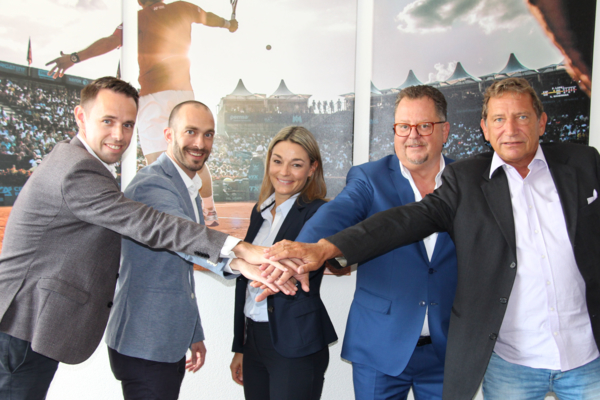